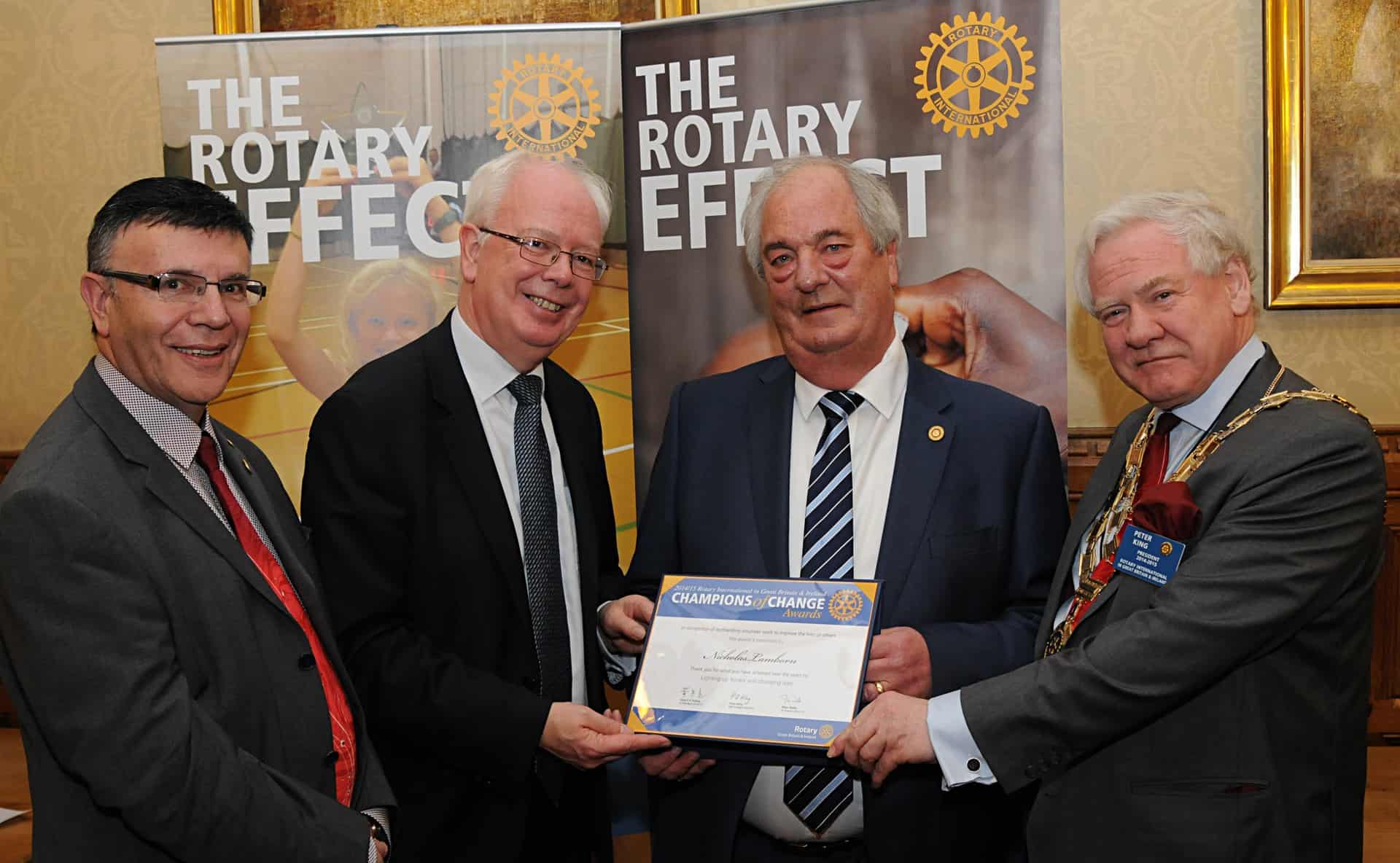 On Tuesday 17th March Nick Lamborn of the Rotary Club of Billericay Mayflower joined a very select team when he received an award for being a 2014/5 Rotary Champion of Change. The ceremony took place in the Palace of Westminster hosted by Lord Wallace of Tankerness, the deputy leader of the House of Lords accompanied by the RIBI president, Peter King and District Governor Stan Keller who nominated Nick for the award.

There are only six coveted awards for significant contributions to the community within the UK and bearing in mind there are over 50,000 Rotarians it is a considerable achievement to have been selected.

Nick has every reason to know the value of a school or college for ‘special’ children when main stream education does not work. It was this knowledge that was to inspire him and fellow Rotarians both in Billericay Mayflower Club and throughout 1240 to launch the Thriftwood Project, the biggest single money-raising project the district has known.

The project was to change the hopes for a sixth form college into a reality. Rotarians, aided by a generous donation from Rotary International were able to pay £70,000 to equip the college and prove to doubters in high places that the college to equip young people with difficulties was viable.

Rotarians’ pride over Nick’s achievement is shared by his grandson Callum the boy with autism who at Thriftwood senior school had proved the value of this type of education. Faced with new education-to-18 regulations he and his classmates would have been plunged back into mainstream education totally unsuited for them once school days were over. Now they are at the new Thriftwood College learning and experiencing the basic skills that will fit them for an independent life.

A chance meeting between Nick and Thriftwood School headmistress Sally Davies at a Rotary Kids Out day was to sow the seeds of change. She explained how the premises at the former St Peter’s, Rainsford school site had become available and that while the education costs would be met by the Government there was no money to equip it in a way that was necessary. And with that conversation, the Thriftwood Project began.

Convinced of the necessity for the college to provide an education-for-life in the halfway house between school and adulthood, Nick inspired his club colleagues to follow the dream. Aided by fellow Rotarian Andy Hunter.

A gratifying number of local clubs supported him and then came a major boost from an unexpected source – help from what was once regarded as a third world country. Sao Paulo District in Brazil offered to make a major donation.

Slowly, almost painfully, the money to buy essential equipment for kitchen craft, music, physical education and computers reached the target and it was Green-for-Go for the new college serving virtually the whole of Essex.