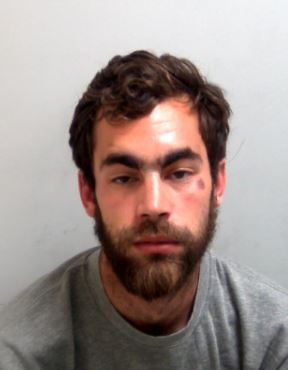 A man who threatened to set a woman’s house on fire in Basildon has been jailed for domestic offences.

Tyler Haluwa, 23, of no fixed address, received 26 months for threatening to destroy property, 16 months for assault causing actual bodily harm and one month for criminal damage, all to run concurrently.

Counts of engaging in coercive and controlling behaviour and threats to kill will remain on file.

At Basildon Crown Court on Tuesday 8 September, he was also made subject of a five-year restraining order.

At around 3am on Wednesday 17 June, Haluwa assaulted the victim by hitting her around the head, momentarily knocking her unconscious.

He then began causing criminal damage inside the address and then threatened to set the property alight if the victim called police. The victim bravely called the police, who quickly attended.

Officers arrested Haluwa before securing charges and a remand against him.

“I want to praise the victim for her courage during the investigation.

“She called us, despite the threats made by Haluwa, and she’s been supporting of her case ever since.

“Haluwa is a domestic abuser and he subjected a woman to violence, he damaged her possessions and he threatened to set fire to her home.

“He has since received more than two years in prison for his actions.”