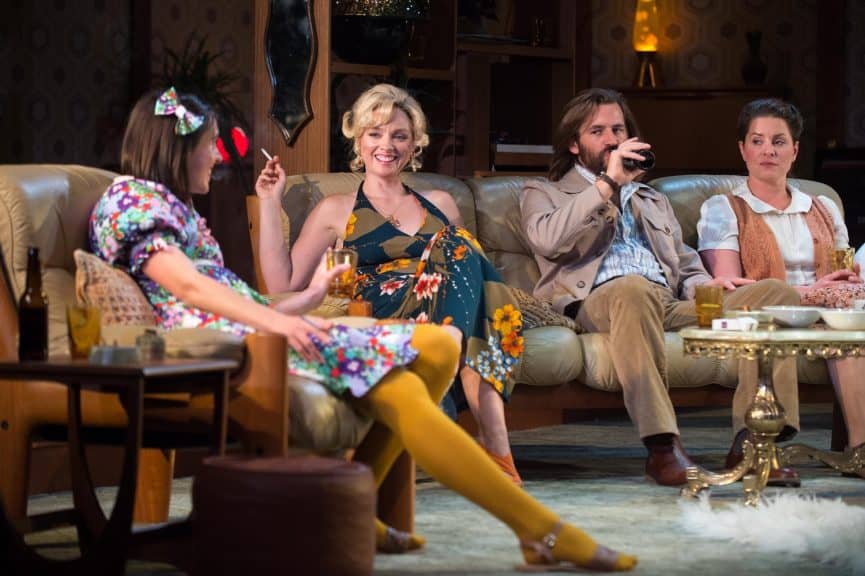 Mike Leigh’s vivid 1970’s comedy about suburban life and the classes comes alive at the Queen’s Theatre, and judging by the atmosphere amid a packed auditorium on Saturday, Hornchurch is loving it.

This wonderful new production comes as the Queen’s celebrates its 65th birthday and with the launch of the QNew Transformation fundraising project.

It is evening in a quiet street in Romford, and teenager Abigail is holding a party for some of her friends.  In the house next door, middle-aged, and middle-class Beverly (Melanie Gutteridge) has invited some of her neighbours around for drinks.

Flighty Angela (Amy Downham) and her laid-back husband Tony (Liam Bergin) are newlyweds who moved into the street just a couple of weeks ago, and are just finding their feet in middle-class suburbia.  Abigail’s mother Susan (Susie Emmett), who has been divorced for three years, is a reluctant guest whilst trying to escape the din of her daughter’s party.  Then there is Beverly’s husband Laurence (Christopher Staines), the estate agent, who is always busy with work, and appears overtired and agitated.

The gathering starts with the expected awkwardness and stiffness you’d expect at a drinks party, as this eclectic bunch discuss the trials and tribulations of their respective lives, descending ever so slightly toward amorality when the drinks start flowing.  Who is going to be dancing with who?  Anyone for Demis Roussos? Or perhaps even a cheesy pineapple stick?  And where do the two guys keep disappearing to?  Are they gatecrashing next door at Abigail’s party?

Douglas Rintoul once again shows off his directing prowess here with this classic tale that originally opened in London in 1977 at the Hampstead Theatre.  It is now an interesting period piece, taking us back to a time when the middle-class was emerging, and when people were “trying to keep up with the Jones’s”.  There is only one set, Beverly and Laurence’s living room, and adjoining kitchen.  It could have been my own mum and dad’s place back then, with it’s wooden cabinets, thick carpets, chairs, settee,  record player and stack of LP’s.  You may remember something very much like it yourself.  The costumes are spot on too, and of their time.  Praise goes to set and costume designer Lee Newby for hitting the nail.  Did I really see Tony wearing corduroy trousers?  He was slightly upstaged though by his wife Angela in her floral number and yellow tights, and yes she had the best dance moves too.

Abigail’s Party is a real hoot and credit is due to all involved in this production.  Go and see it now at the Queen’s.  It runs until 22nd September.