Sir Alan Ayckbourn’s mesmerising ghost story about suicide, a father’s loss, and his battle with bereavement as he seeks to find answers, got a warm welcome in Hornchurch on Saturday on its opening night. Perhaps a departure for Sir Alan – best known for comedy with such successes under his belt as The Norman Conquests, Absurd Person Singular, and Bedroom Farce – and who wrote Haunting Julia in 1994 having been inspired by the 1983 horror novel The Woman in Black by Susan Hill, itself turned into a successful stage production – delivers here with panache. 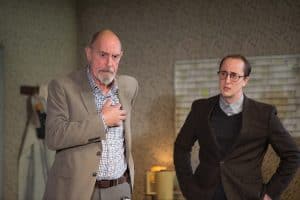 Ayckbourn deduced that tense story writing and acting was key to making audiences jump, rather than relying on special effects, and this production by the Queen’s Theatre certainly comes across as psychological drama rather than horror. The haunting in this tale, is really more about the indelible mark Julia, a gifted nineteen-year-old musician made upon the world, and on the lives of those she touched. The people closest to her, and who thought they knew her very well, including her father, are in for a few surprises in this two-hour, dialogue driven three-hander featuring an all male cast. 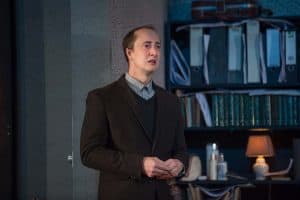 The entire story takes place within the confines of a dingy attic room, or is it?  It looks more like a recreation of Julia Lukin’s final abode, and the scene of her untimely demise, in a sectioned off area of a museum.  On the wall is a large photo of the child prodigy playing a piano, and there is a push-button controlled ‘tour’ audio-recording containing the dispassionate voice of an actress that sounds a faint bit like Julia. It pleases her father Joe however, as it is now his only ‘connect’ with his deceased daughter, some twelve-years after her suicide. Now in his sixties, Yorkshireman Joe cannot find closure. He hears sounds that aren’t really there or are they?  He senses a coldness in the room that has a rather odd bricked up doorway that apparently led to a staircase. Joe believes there are still many unanswered questions as to why a girl with the world at her feet would take her own life, or did she? 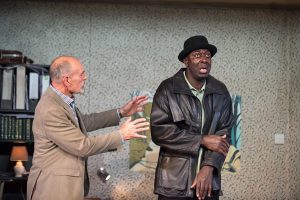 Julia’s student boyfriend Alan, now a man in his thirties, comes across more as a fan, a distant admirer of Julia’s musical talent, as he saunters around the bedsit. Then there is Ken, who has offered Joe his services as a psychic who can contact the dead, but proves himself a fake when he hugs Julia’s favourite teddy bear in a somewhat contrived effort to reach out to her departed spirit.  There is certainly more to him than meets they eye though, with the three protagonists testing each other continuously. As accusations fly, tension between the three men builds towards a spectacular finale. Who will have the final say? 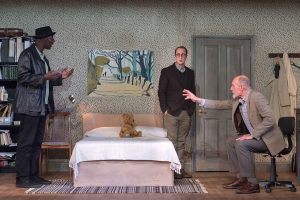 Ayckbourn’s wit is frequent throughout, which is hardly surprising given the renowned playwright’s theatrical roots. Sam Cox is thoroughly absorbing, and turns in a splendidly heart-wrenching performance as the bereaved father Joe Lukin with a continued air of melancholy while looking for someone to blame.  Matthew Spencer plays Andy Rollinson, who suitably shuffles around the attic room with smiles abound, making occasional quips about his memories of his student days and admiration of Julia, all the while detached, though overtly concerned about Joe’s mental state. Perhaps the most inspired piece of casting is the part of the pseudo-psychic, ably handled by the stunningly tall black actor Clive Llewellyn, who in all of his six-feet-and-eight-inches of glory, is electrifying as gentle-giant Ken Chase.  His emotional drive is as powerful as the play itself, and when events reach a terrifying crescendo, Haunting Julia is certain to have you – the audience – jumping out of your seats. 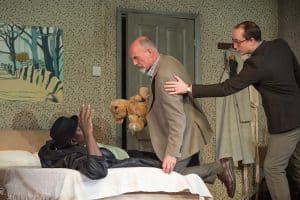 Lucy Pitman-Wallace directs, and design is by Jess Curtis, and the detailed attic-room set is by the Queen’s Theatre Workshop.

Haunting Julia runs until 17th November showing at 7.30pm most evenings, and also with some matinee performances. Further details including ticket prices can be found here https://www.queens-theatre.co.uk/whats-on/show/haunting-julia/