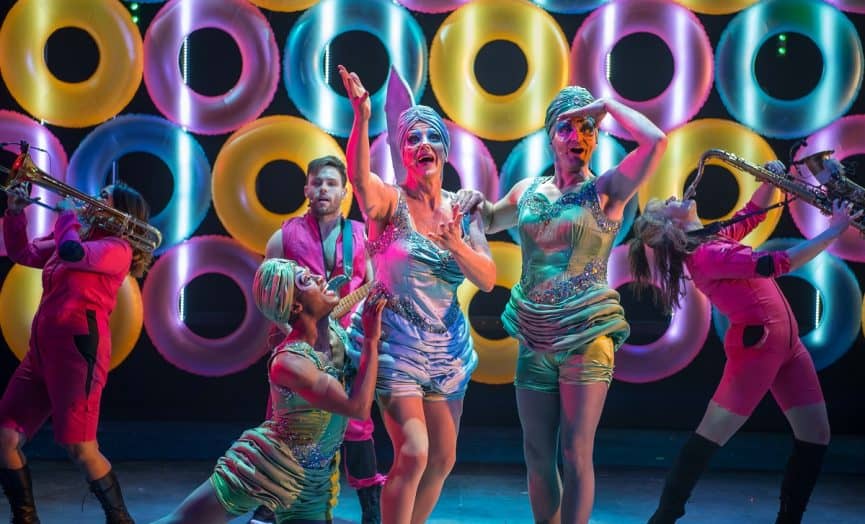 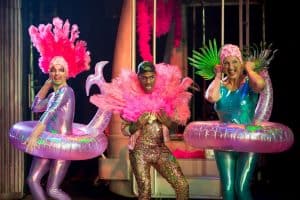 Douglas Rintoul once again shows his directing prowess, as we are whisked along the road with the cast, and the most amazing thing of all is that you really feel like you are there with them. 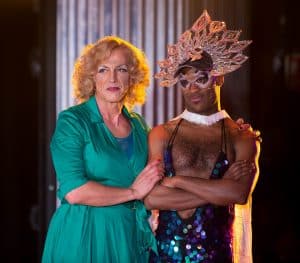 The story, if you haven’t seen the movie, is about three performing drag queens who travel across Australia, following a job offer, and the various adventures they have along the way.
Sydney based Tick (Tom Giles), who goes under the stage name of ‘Mitzi’, accepts an offer of work from his estranged wife Marion (Clara Darcy) to perform at a casino in Alice Springs, and so he along with fellow drag artistes Adam ‘Felicia’ (Daniel Bailey), and a recently bereaved transgender woman, Bernadette (Mark Inscoe), set off in a tour bus which they christen ‘Priscilla’. The only drawback is that Tick has a young son, and he is terrified of the boy, who lives with his mum, finding out that dad is gay, and that he might be ashamed to acknowledge dad’s ‘profession’, considering it sordid. 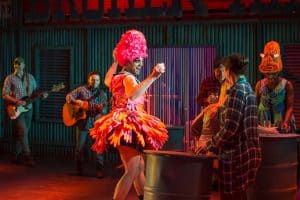 One has to praise the Queen’s Theatre Workshop because the set changes are very impressive as we move from place to place. From the sadness of a funeral, and then the journey aboard the bus, arriving in Broken Hill, the very northern part of New South Wales, to a hostile reception (gosh I’ve flown over there a couple of times!). Perhaps one would expect revulsion, and a strong homophobic response from swaggering hard-bitten rural people in that part of the world when confronted with such gayness, as is portrayed here.  And with that there are the outrageously gorgeous costumes by the Queen’s Theatre Wardrobe Department which, along with bright make-up, loud accessories, and some startlingly funny wigs that even Lady Gaga would be jealous of, are as colourful as the show itself. All the performers are miked up as well, so there is absolutely no problem hearing the dialogue, or song lyrics if you are a bit hard of hearing. 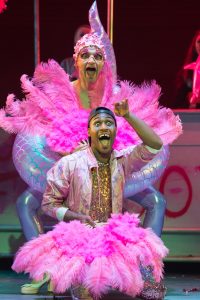 There is high tension, drama, and some really romantic moments between streetwise Bernadette and Bob (Michael Cuckson), the burly all-Aussie mechanic, who helps repair the bus when it breaks down. You’ll sing along with the Community Chorus to all those 80’s disco hits like ‘Hot Stuff’, ‘I Will Survive’, and ‘Go West’, and enjoy the impressive choreography. Maybe you’ll shed a tear or two as Tick and his son Benji (played by no less than three bright and able young actors Frankie Day, Alfie Gosling, and Joshua Neal), get to know each other for the first time, and they duet together with Elvis Presley’s ‘Always On My Mind’.  Wonderful stuff! 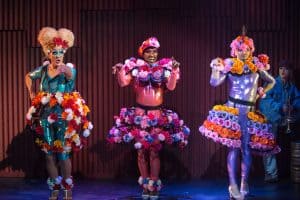 Best of all though is the comedy, and I will warn this is humour strictly for adults, and not for the faint hearted. There are plenty of hilarious one liners that bring on those belly laughs, and who gets the best of those? My money is on Bernadette, who’s sharp tongue can turn the air blue in an instant.  Though there is the classic bit with the homophobic labourers in the hard hats who corner the obnoxious Felicia in one scene. The line she comes out with, which is straight from the movie (I cannot say it here because it’s far too rude), is up there with Clint Eastwood’s “Make My Day”. All the characters in the show are likable, even the nasty ones!

Hornchurch residents are so lucky having West End quality shows right on their own doorstep, and that quality does resonate. The performance on Friday 4th May was rewarded with a standing ovation at the end, and deservedly so. Go and see it now and of course, you can dress up if you want!

Priscilla, Queen of the Desert runs until 26th May. Tickets are selling fast, so book now to avoid disappointment.