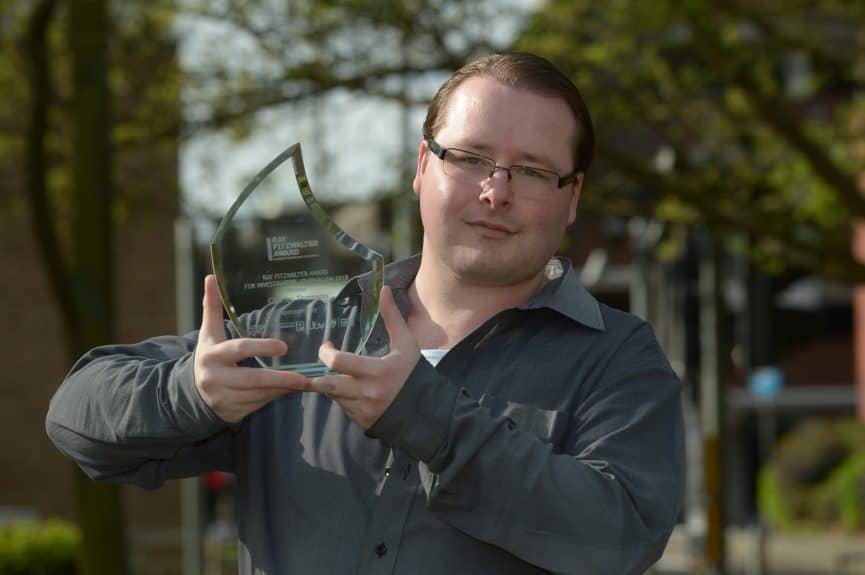 If you are a regular listener to Thursday’s Drivetime on Gateway 97.8, you will no doubt have heard the dulcet tones of Charles Thomson. He is the Yellow Advertiser’s Chief Reporter, who pops in for an hour each week to chat about what’s in the paper, and discuss the big news stories making headlines locally.

And now Charles has deservedly won the inaugural Ray Fitzwater Award for Investigative Journalism, following his detailed reports on the ‘Shoebury sex-ring’, which abused impoverished and looked-after children in the 1980’s.

Charles introduced whistleblowers to the then Essex Chief Crime Commissioner, Nick Alston, and this resulted in the police investigation being reopened. Further work by Charles has seen more victims and whistleblowers coming forward and the investigation was reopened a second time, and now at least one person has been arrested.

Charles travelled to Greater Manchester, and to the University of Salford’s Media City for the ceremony last Thursday 19th April, having been nominated for the national award. The prize – sponsored by ITV and Channel 4, is named after Ray Fitzwater, the longest-serving editor of Granada Television’s ‘World in Action’. The factual programme was a mainstay of ITV’s peak time television viewing throughout the 1960’s, 70’s, 80’s and 90’s.

Local lad Charles, who turned 30 just last week, has lived in Basildon for most of his life. He went to school in the town, later attended college in Thurrock, and did his journalism degree at the University of Essex in Southend.

He was presented with his award by BAFTA-winning ITV journalist Lucy Meacock, and Channel 4’s Head of News and Current Affairs Dorothy Byrne, after beating off competition from the BBC.

“We at Gateway 97.8 want to congratulate Charles, and think this is a major achievement for a truly local journalist working for an excellent local newspaper. He clearly knows his patch really well having lived here all his life, and he is not afraid to confront the issues that matter to people locally and present them in the paper. Charles was up against other nominees from the world of BBC radio and television. Nevertheless, his dogeared determination to bring forth new information about the ‘Shoebury sex-ring’, has made compelling reading in the Yellow Advertiser recently, and has seen new evidence presented to the police prompting further investigation. Charles deserves this award, and I am very proud to have him as a guest on my show each Thursday afternoon for our regular ‘News Hour’, where we both enjoy getting our teeth into the big stories of the week.”

It doesn’t stop here. Word has it that Charles has been nominated for another top journalism award. Watch this space.

Hear Charles chatting to Ros on Drivetime about his win by clicking on the link below.