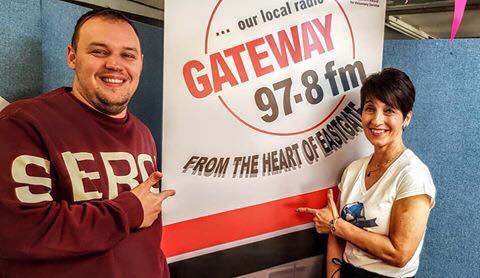 Gateway 97.8 has announced that it is launching a brand-new monthly autism awareness feature on the mid-morning Daytime show. The feature, which is in partnership with autism charity – Anna Kennedy Online, will be presented by Aston Avery, who has presented the Daytime show at the station for over four years.

Aston, from Basildon, was first diagnosed with autism at just two and a half years old and was non-verbal until aged six. He spent the majority of his childhood in hospital suffering from a serious bowel condition. Now aged 27, Aston is an ambassador for Anna Kennedy Online, and promotes autism awareness in the community. In 2016, he won a National Diversity Award for being a positive role model.

The new monthly radio feature will be a platform for discussion about autism, raising awareness about the condition and featuring interviews with parents, autistic adults and professionals in the field of autism.Aston presented a one-hour autism discussion show on Gateway 97.8 last summer, which was very popular with listeners. The new feature will air monthly throughout the popular Daytime slot (10am-1pm).

The first instalment of the new live feature will air on Wednesday 12thJune, where Aston will be joined by autism campaigner, Anna Kennedy and local charity fundraiser, Christopher Cooper. Speaking about the new feature, Anna Kennedy said:

“I am so pleased that Gateway 97.8 is a station that embraces diversity. The new radio feature will give Aston and I the opportunity to invite individuals from the local autism community and share their stories. We will also share practical accessible advice for all those affected by autism, providing opportunities for discussion and reaching out for those who need to talk. There are many families and individuals that feel isolated or lost and hopefully by airing this show monthly, Aston, Gateway and I will build on supporting the Autism community.”

Aston’s parents, Dawn and Keith, are his biggest fans, saying:

“As parents, we could not be prouder of Aston’s determination and enthusiasm in raising autism awareness. Things were mighty difficult for him and us in the early years so if the show assists just one family, it is a job well done. Since becoming an ambassador of the autism charity: Anna Kennedy Online, Aston has embraced his condition and become a real local role model for what you can achieve in the face of adversity. Being part of Gateway 97.8, and now combining his love of radio with his passion of raising autism awareness, could not be a better accolade. We are really looking forward to the new feature.”

“I am really excited to be a part of the new show on Gateway 97.8. I am a regular daytime presenter and I’m proud to say I have autism; this show will enable me to work jointly with the amazing Anna Kennedy to be able to give advice and spread awareness. I am the ambassador of the Anna Kennedy Online charity and since joining the charity, I have been working to bring Essex to the forefront of being an autism friendly county. I hope by doing this show, we can help any of our listeners who are either on the spectrum or living with someone on the spectrum. I am excited to think that this show may help others realise that being autistic does not mean you cannot achieve, and that each and every one of us have a worthy place in the community. My name is Aston Avery I am autistic and I am proud!”