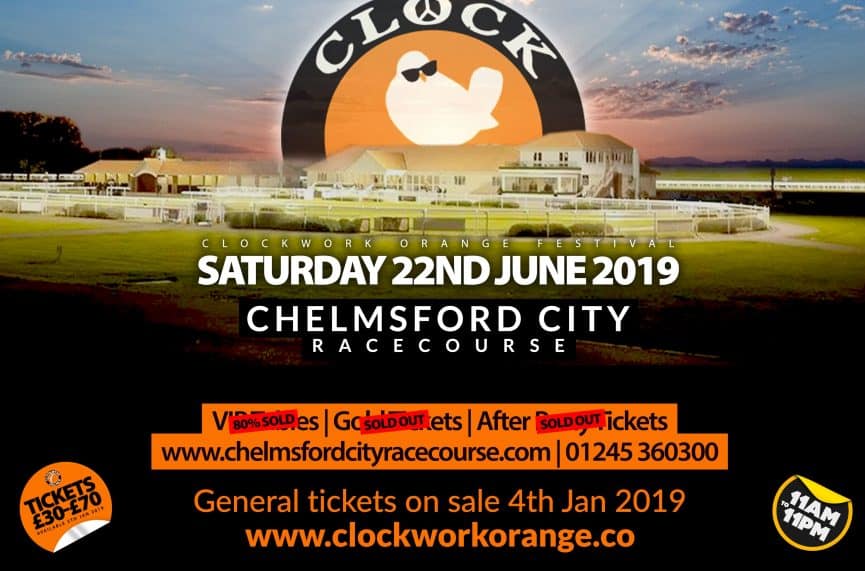 Two Essex boys are preparing for a new music festival for more than 30,000 people, in Essex.

Danny Gould and Andy Manston, both 46, from Billericay, will be hosting their first Clockstock festival at Chelmsford race course on June 22, 2019.

The huge undertaking comes after 25 years of thrilling sell out parties across the UK, Europe, Australia and Ibiza.

The boys promise the event will be the first dedicated house music festival the country has seen and will bring the thrills of Ibiza with it.

This year, the white isle of Ibiza turned orange as plane loads of smiling clubbers, veterans of the island’s early days along with newbies, for Clockwork’s emotional 25th year anniversary.

It saw the ‘Orange Army’ pack the cavernous club’s to the rafters in the evenings.

Daytime saw the beeches awash with Clockworkers of all ages, shapes and sizes serenaded by heavyweight DJ’s such as Celebrity Big Brother contestant, Brandon Block.

There are now more than 18,000 ‘Clockworkers’, who endlessly hail the duo as their heroes for having given them a much needed lift to life, for transporting them to a ‘loving place with like minded people where they can dance, forget the bills, forget reality surrounded by thousands of smiling faces.’

Danny Gould, 46, is poetic about the success of the organisation he said: “Us children of the sixties and seventies grew into the acid house explosion with became the rave generation of the late eighties and nineties.

“Our love and memories for those days was without question yet we walked into mortgages, packed trains, children, deaths and marriages, so we thought we had hung up our dancing shoes.

“But you can’t extinguish the love of house music especially the olds cool of yesteryear.

“Who would have thought, 26 years later we will be hosting our own festival in Chelmsford, Essex in 2019.

“It appears you only live twice, the kids grown up, the mortgages under control, divorced, balding with bellies, but we aren’t ready to retire, not ready to fade into the Ibizan sunset, we want to funking (correct) have it large all over again.”

Andy Manston, 46, said thousand of people create an immense buzz in the lead up to the events, he said:

“It’s incredible the excitement that builds leading up to an event is quite overwhelming.

“We are part of it, Danny and I DJ at the events, we know pretty much everyone that comes, it’s not like a normal club night, you know it is going to be magical.”

United Nations disaster relief worker, Barry Hanks, 49, from Leigh-on-Sea, insists there is ‘nothing quite as good as seeing thousands of people in their forties and fifties having it large.’

“You don’t have to be an Adonis to go to Clockwork, most of us are that little bit older but we still want to dance to be in a big happy place with like minded souls.

“It may sound corny, but it really is a non judgemental placed full of love, we are known as the Orange Family, La Familia Naranja.”

IT Manager, Paul Dawes, 43, from Bexley Heath said hen planned his year around Clockwork, he said:

“Why should we sit at home waiting to die?

“This is a big party, a big production, with people aged from 17 to 70, it’s absolutely incredible.”

“New pastures fresh and not green are the certainty for ever increasing desire is it not?

“If we remain staunch to the missionary position then we never introduce the German Table downward move and what would life be like then?”