I’ve been slacking in the new year! This is my first blog post of 2018!

Anyway, hope your had a great Xmas and New Year (and – if I’d left this much longer – Valentine’s Day).

Let’s get stuck in!

This week’s show marked the return of the worst-named feature in the history of radio, ‘Alterni-Ties’.

So, each time we do this feature, I go in totally blind, and am set the challenge to prove how the top story in that day’s news (whatever it may be), can possibly be related to a random alternative band or artist. The news story in question is whatever happens to be the top headline at 3:00pm, when the show starts, and the band/artist is chosen by whoever happens to be hosting ‘Coffee & Tea’ before me.

This week, Donald Trump was (once again) dominating the headlines, and the alternative artist chosen by Johnny Jenkins was britpop legends Blur.

I had less than an hour (whilst juggling everything else in the show) to prove how Blur is related to Donald Trump. So, here goes………. 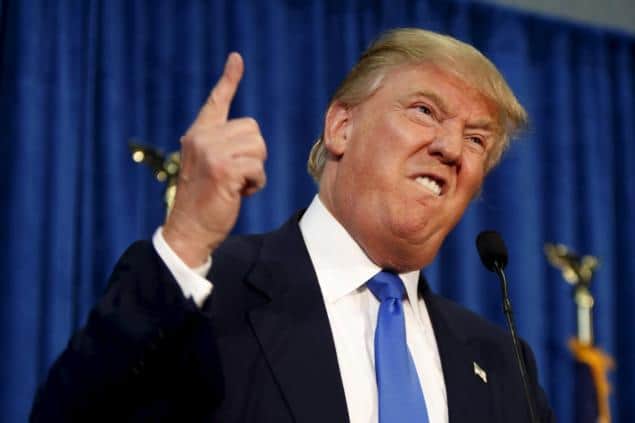 Donald Trump is the 45th president of the United States, a man who has become well-known for finding new and inventive ways to fit his exceptionally large feet into his even bigger mouth. He took over the hotseat from Barrack Obama, who – despite claims by Trump to the contrary – was born in the U.S., in Honolulu, Hawaii, two years after the territory was admitted to the Union as the 50th state. Obama’s home state is also the setting of ‘Hawaii 5-0’, and the Disney animated movie, ‘Lilo & Stitch’. Among that film’s voice cast, you can find Ving Rhames as brilliantly named secret agent, Cobra Bubbles. Rhames has also played a secret agent in the ‘Mission Impossible’ franchise, alongside Tom Cruise and Simon Pegg. Pegg first shot to fame alongside Nick Frost and director Edgar Wright in the brilliant sitcom ‘Spaced’, and on the big screen in ‘Shaun of The Dead’. That movie just happens to be one of my favourite films of all time, from it’s humour, to it’s awesome soundtrack. That soundtrack features such gems as ‘Kernkraft 400’ from Zombie Nation, Queen’s ‘Don’t Stop Me Now’ and ‘You’re My Best Friend’, and The Smiths’ ‘Panic’. Arguably the most famous member of The Smiths is Morrissey, a man who has released countless hits, and been signed to a number of labels over his long music career. One of the banners he has flown under was Parlophone records, the same label that has also played host, at one point in history, to britpop legends, Blur.

Which brings us to your ‘Alternative Chart’ for this week. There were a few new entries in the chart, two of which were unfortunately due to some bad news. During the week, the lead singer of The Cranberries, Dolores O’Riordan, tragically passed away, the details of which are still coming out. If there’s one positive to come out of it, it’s that The Cranberries brilliant back-catalogue has received a lot of love this past week.

Here’s the alternative tunes you’ve been listening to this week:

The version of ‘Zombie’ that features at No.4 in this week’s chart was recorded by Bad Wolves. As well as being a brilliant band in their own right, they were due to record with Dolores O’Riordan this week, and instead recorded this cover, the proceeds of which are going to Dolores’ children. It also happens to be an absolutely fantastic rendition of your ‘Alternative No.1’ this week.

I’m going to leave you with that, and in the meantime, have a fantastic weekend, enjoy your week, and I’ll be back next Saturday from 3pm.

Don’t forget, you can listen to the show in full via our new ‘Listen Again’ feature on the website.