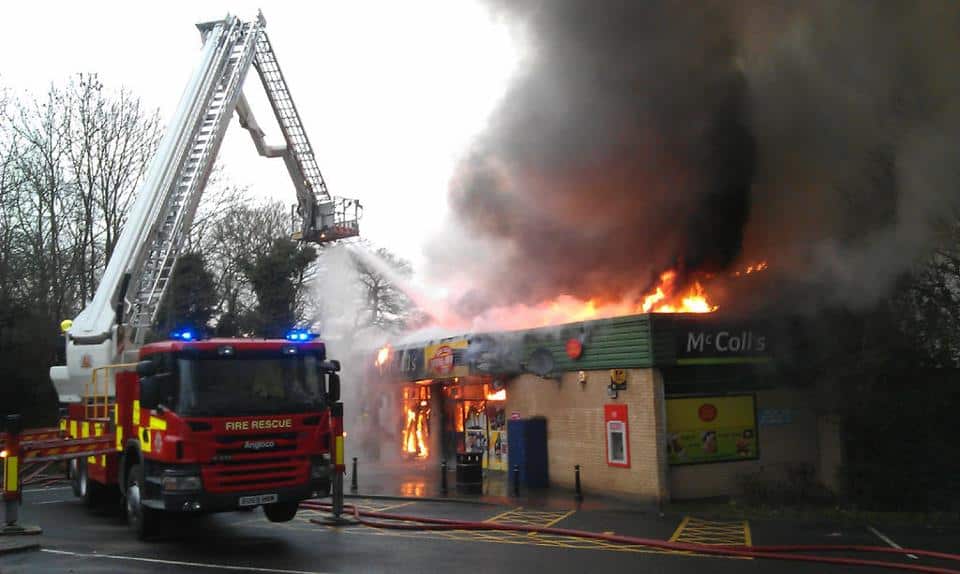 Five businesses have been destroyed in a ‘devastating’ fire at a shopping parade, which went up in flames after a huge blaze broke out in a row of shops, involving a series of small explosions, which caused the roof to collapsed.

The fire at The Triangle Centre, in High Road, Langdon Hills, Basildon, which included the Elizabeth Louise Hair and Beauty Salon, McColl’s convenience store, a chip shop and a computer company, is believed to have started because of a technical fault in the roof of Hong Kong House Chinese take-away.

Explosions believed to be from alcohol and cannisters, could be heard coming from the businesses, which were all destroyed in the blaze.

Around 20 firefighters from Basildon, Rayleigh Weir and Orsett were called to the scene, which started just before 2pm. A special platform was also used to soak the fire from above.

The Hyde in Langdon Hills was closed off in both directions at the Delmores junction, which also affected High Road between Valence Way and Delmores, while firefighters battled the flames from all angles.

60% of the roof was alight when the fire service arrived, and by 3:20pm it had spread to the entire roof of the shopping centre. Nobody was hurt as a result of the fire.

Gonzo spoke earlier to witness Charleigh Sullivan, about what kind of people used the shops: “A lot of people do, especially local people, old and young.

“It’s sad to see the salon go, because that is the most local salon other that the town, so now we will have to go to the shops at the Laindon Centre.

“It’s not good because they were family businesses.”

Assistant divisional officer Mark Earwicker, in charge of the operation, advised local residents, and people living nearby to keep their windows and doors shut because of thick smoke coming from the building.

Speaking from the scene he said: “When crews arrived they were faced with a well developed fire in the roof of the building, which quickly spread across the centre which houses three units.

“Crews have worked extremely hard and have done an excellent job in getting on top of this fire.

“The fire involved a number canisters and a quantity of alcohol which caused a few small explosions within the building, nothing which caused us any real problems.

“The roof has now collapsed into the building and has covered the fire creating pockets of fire in the building which are proving hard for crews to get at.

“We will be here for many hours yet to come turning over and damping down.”

Basildon Council sent their own officers to The Triangle to provide support to residents, and their corporate property team and building surveyors were also on hand to offer help and advice to the shop tenants.

Firefighters are expected to remain at the scene into the night. A full level 2 investigation will take place to establish the cause of the fire.