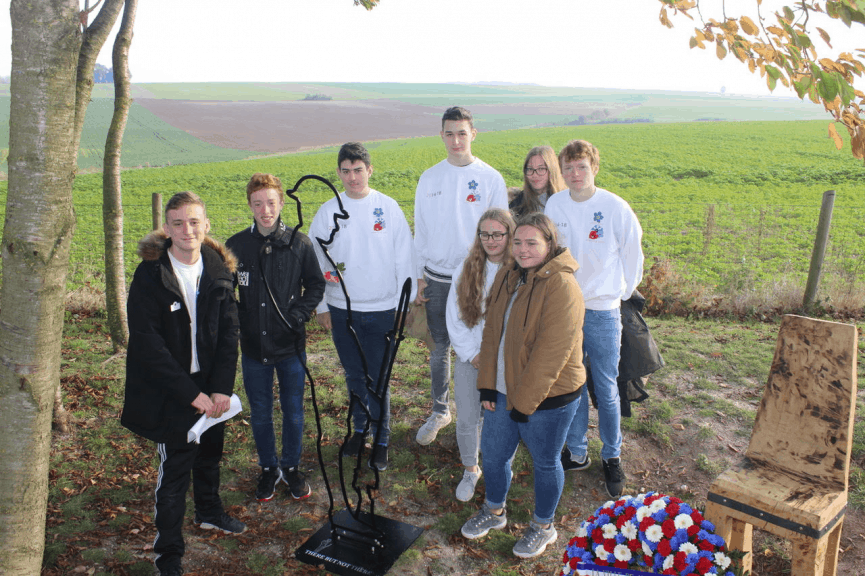 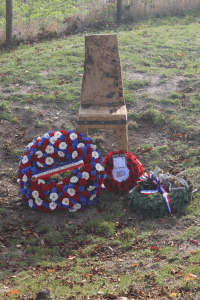 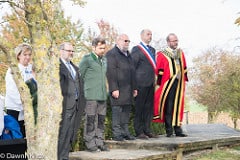 On Sunday the 4th November, members of the Forget Never Sacrifice and Legacy project team unveiled the ‘Empty Chair’ memorial at the Lochnagar Crater, at The Somme, to commemorate the end of WW1 and to leave a lasting legacy following Basildon’s Forget Never 4 year project, which was sponsored by the Heritage Lottery Fund. The Chair was made by the Head Forester from Heiligenhaus, Hannes Johanssen and was carved from a 120 year old Oak tree which fell across the railway line in 2016 which would have been used by the German men going off to fight in 1914. This made the ‘Chair’ even more special.

The service was held at the Crater which is owned by Mr Richard Dunning who bought the crater to preserve it and to save the land being sold to developers, thereby destroying this most important piece of history. Richard is very pleased that there is now a memorial to ALL men killed at the crater and a fitting place for ALL countries to share. Richard will be reading a roll call at the crater on Sunday 11th November and for the first time will include the names of 5 men killed from Heiligenhaus, Germany.

Present on Sunday were representatives from both of Basildon’s Twin Towns of Heiligenhaus, Germany, and Meaux, France. The Deputy Mayor’s from both towns, Heinz-Peter Schreven and Laurent Guillaume as well as Councillor David Dadds, Mayor of Basildon, who came to add their support to the project following involvement from all three towns over the last 4 years. The Heritage Lottery Fund find this project unique because we have worked alongside German and French towns as well as Ypres in Belgium. Also present were Luke Elmes and Alex Laver from Basildon, 6 students from Heiligenhaus as well as their teacher and the Chairman of the Heiligenhaus Twinning Group, Thomas Rickel.

There will also be representatives from the German and French Twin Towns at St. Martin’s Church Basildon, and Laindon War memorial on Sunday 11th (Armistice Day).