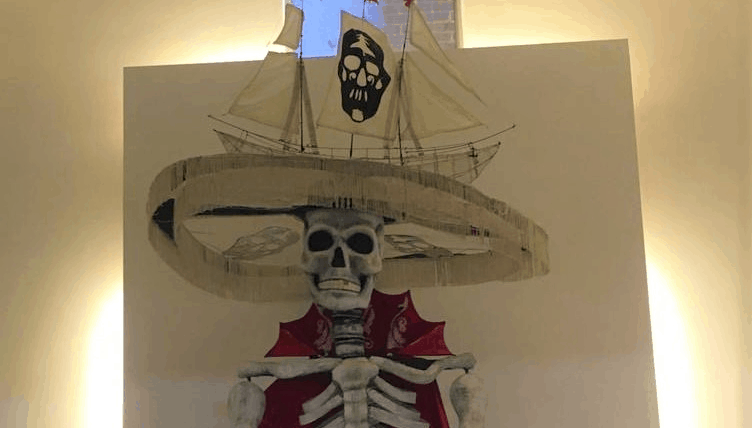 There’s a new resident at the Thameside Complex. Kinetika’s Midnight Robber puppet, is now on display in the foyer.

The 4 metre high Midnight Robber puppet was made for the Notting Hill Carnival in 2004 by Tony Mason for Kinetika. The Midnight Robber is a traditional character from Trinidad carnival which has been subject to interpretation by many designers over the years.  Here he is a skeleton, complete with an oversized hat and an intricately patterned cape. He was a part of Kinetika’s production, Din Shuru that told the story of the Indian migration to Trinidad in the late 19th Century. This character was ‘the recruiter’ encouraging Indians to leave home and make for Trinidad, the land of sugar. They were taken to the Caribbean to cut the sugar cane. Kinetika’s carnival band Din Shuru celebrated the influence of Indian culture in Caribbean Carnival. More about this can be found here:

The puppet has been a talking point in the Kinetika studio at the High House Production Park for the last five years but has never been seen in Thurrock before now. The Midnight Robber will be watching over visitors to  the Thameside building until October.

To see pictures of the Midnight Robber in action and to find out more about him, please click here.

Kinetika has an unrivalled reputation for large scale puppets. Last year’s Tilbury Carnival saw the Children of the Windrush make an appearance and in 2018, the Tilbury Docker was created to help the Port of Tilbury celebrate the 70th anniversary of the arrival of the Empire Windrush. Kinetika puppets are available to hire for all types of events. To find out more, please click here.

To find out more on future Kinetika projects, please go to www.kinetika.co.uk, and discover how you could get involved.